There are several organized and semi-organized group skating ventures roaming the city at various times of the week, primarily during the skating season from mid-spring to mid-autumn. 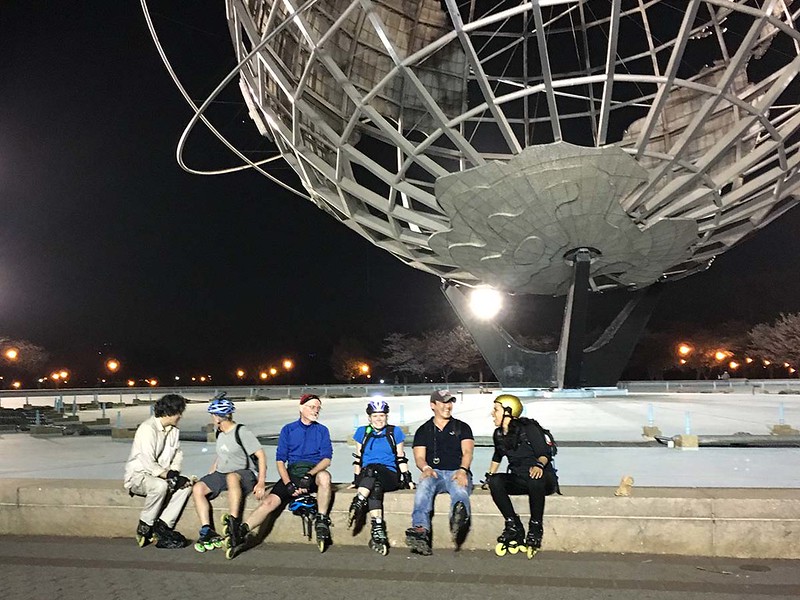 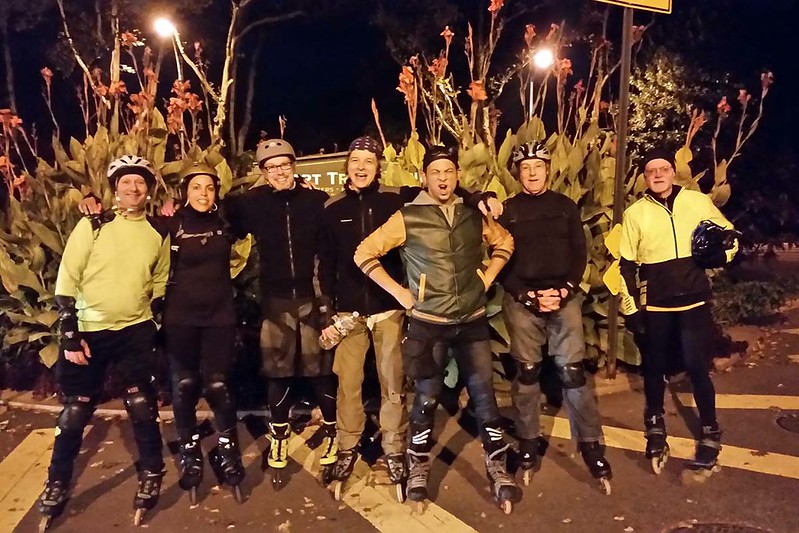 The oldest group skate in town is the Tuesday Night Skate (TNS). The current version of the TNS is small as group skates go. In 2016-18, a group of 15 skaters was considered a nice crew. (Back in the 1990s, TNS might max out at 50 skaters.) More often the group numbers about 10 or 12, while in the coldest depths of winter there is a possibility of just three.

Since spring 2016, TNS has met by the statue of General Sherman in Manhattan's Grand Army Plaza, at the corner of Fifth Ave. and 60th St. This is also the southeast corner entrance to Central Park (The west side Blades skate shop where TNS met for many, many years closed permanently in January 2016.) Meet-up begins 7:45 p.m., and the skate rolls out shortly after 8:00.

TNS skates year-round, weather permitting. The skate will be called off if the streets are wet or otherwise unskateable, if temperatures are below freezing, and/or the winds too strong. During winter (late November through March), TNS might re-schedule if Tuesday's weather is bad, but during the rest of the year, the alternative is to do the Wednesday Night Skate. Late TNS announcements will most likely be found on the Empire Facebook page.

Good street skating skills are a must on the TNS. The ability of the regular participants is intermediate or better. TNS tours are relatively fast-paced and travel longer distances than most regular group skates. New or casual skaters could easily be left behind. One city magazine commented about the TNS in the late 1990s that "they care more about skating than they do about you." The Tuesday Night crew immediately adopted this statement as their motto.

The TNS route changes every week, but some destinations seem to recur about once a month. In 2016-18, these included the Grand Army Plaza entrance to Prospect Park in Brooklyn; the Unisphere in Flushing Meadows, Queens; Fort Tryon and the Cloisters in upper Manhattan; the Jerome Park Reservoir in the Bronx (returning via the Grand Concourse); and a skate-friendly establishment across the GW Bridge in Jersey that serves adult beverages. Other destinations include the Bronx Zoo or a skate-friendly pub in Red Hook, Brooklyn. Distance traveled is usually pretty close to 20 miles (30 km) round-trip, but some summer routes can go 25. Finishing time is between 11:00 and 11:30. Depending on the route, the end point might be at a pub in the West 80s or the East 50s.

The TNS is considered an Empire Skate Club event, and as with any Empire event, helmets and wrist protection are either required or extremely strongly encouraged. Blinky lights and/or reflective clothing are also very highly recommended. More info is available on the Empire Tuesday Night Skate webpage.

(Historical note: The TNS originally started in the late 1980s, and became an organized event under the aegis of the Big Apple Road Rollers (later known as the New York Road Skaters Association) in 1989. It was independent again from late 1994 to the end of 1998, and then affiliated with the Empire Skate Club in 1999.)

The Wednesday Night Skate (WNS) is the biggest group skate in New York City, and has been so since the late 1990s. Possibly this is because of its moderate pace and distance, possibly it is its relatively early finishing time, possibly it's a more central meeting point. And perhaps it's all of those. In any event, as of 2018, WNS still reliably drew around 50 skaters.

The only problem is that the WNS does not skate year-round. Officially it begins in early April and finishes at the end of October. WNS regulars might unofficially meet in November or March if the weather is good.

The Wednesday Night Skate meets along the steps on the south-side steps of Manhattan's Union Square (14th St. at Broadway) at 7:45 p.m. and starts rolling at 8:00. WNS finishes between 10:00 and 10:30 at a skate-friendly establishment near Union Square where people can get a drink and socialize some more.

There is no rain-date if Wednesday's weather is bad. See the WNS Facebook page for the latest updates.

Although the WNS pace is moderate and the event is generally suitable for intermediate-level skaters, participants do need to be comfortable skating on city streets and in a large group of people. Routes typically go about 12-15 miles (20 km). The longest tours might involve taking the bridges over to Brooklyn and Queens — e.g., the popular "Three Bridges" skate — while shorter routes might be just a loop around central or lower Manhattan, or perhaps up to Grant's Tomb and back.

The Central Park Skate Patrol has sponsored a leisurely, social skate around the Central Park Loop on summer Thursday evenings since 2008. It starts at the Columbus Circle entrance (the Merchants Gate) to the park; meet at 7 p.m. and starts rolling at 7:15. For more, see the Skate Patrol website. Updates during 2020 were posted on the Patrol's Skate School Meetup page.

The Thursday Evening Skate is intended for skaters who are looking for a casual group skate and who don't feel the need to be out on the streets or to be zipping around at high speeds. Any skater who has progressed beyond basic braking lessons and who is comfortable navigating the hills of the Central Park loop should be able to handle this tour. After the skate, participants may adjourn to a nearby skate-friendly restaurant.

Note: The Thursday Evening Skate was on hiatus in 2019. We have heard that they may have resumed in July 2020.

The Skate Patrol TES is pretty much the same in concept as the Thursday Evening Roll previously organized by the Empire Skate Club.

New in 2018 was a fairly casual Thursday night skate around Manhattan, with plenty of time at breaks to work on tricks and otherwise have fun. That year it was known as the Thursday Street Skate. In 2019, this group tried shifting to Friday evening, but their activities that year seem to have been erratic. In any event, as of summer 2020, they are back rolling on Thursday evening.

At last check, it looks like the Thursday crew meets up on the north side of Union Square at 7:30 p.m. and rolls put at 8. Distance is not particularly long, typically less than 10 miles. There are a fair number of freestyle and aggressive skaters in the group, and they take time out for showing off their skills. 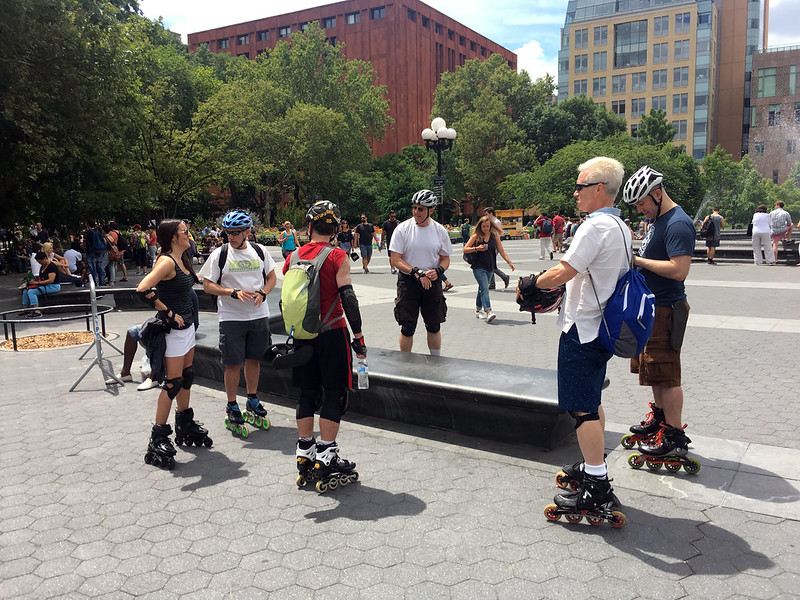 Meeting up for an Empire Sunday skate, 2016

The Empire Skate Club has had some sort of warm-weather weekend group skate ever since the club formed in 1997. For several years it was a regular Sunday morning event, usually meeting at the Merchants Gate/Columbus Circle entrance to Central Park, but around 2005 it became less predictable, meeting at other locations (such as the Central Park Bandshell or at Washington Square Park) and later in the day or on Saturday.

Empire weekend skates vary quite a bit in distance and pace, depending on who is leading the particular tour. It could be a moderate round-trip skate down to the Battery or up to the Cloisters. Sometimes it's akin to a Tuesday nighter but at a Wednesday pace, such as a trip over the bridge to Brooklyn and cruising around Red Hook. On the most strenuous side might be a skate out to Coney Island for a hot dog or to a skate-friendly restaurant in Sheepshead Bay or even Far Rockaway, with the hardcore skaters returning to Manhattan by skate and the less hardcore taking the subway.

You can check the Empire calendar to see what may be on the schedule. However, announcements of Empire weekend skates are often made with very short notice, sometimes so little that they don't make it onto the calendar. But they are almost certain to be announced via the club's Facebook page, so check there regularly if you are interested.

In addition to Tuesday Night Skate and weekend skates, the Empire Skate Club organizes a few special events that are worth highlighting.

The first weekend of August, Empire organizes the Big Apple Roll, four days (Thursday through Sunday) of group skates, clinics, dining, and other events that attracts skaters from up and down the East Coast. Group skate distances vary, some as short as just 10 miles but there will be a couple of 20 or a bit longer.

The last Saturday of October, Empire does a 34-mile (55 km) skate to Sleepy Hollow for Hallowe'en festivities. The tour starts at Columbus Circle in Manhattan and heads north via city bikepaths. Once in Westchester County, the route might follow the South County Trail for a ways, but at one point or another, it will switch over to follow Route 9 (very skateable as of October 2016) to complete the distance to Tarrytown and Sleepy Hollow. Shorter options are available if you join the Hallowe'en skate at some intermediate point such as Inwood or Yonkers. Despite the distance, the pace is very moderate, with long rest stops at points where late-joining skaters can hook in. There will also be a sag wagon.

There are several other opportunities each month — especially during the summer — for joint group cycle/skate activities. Well, they're pretty much bike events, but skaters do tag along on some of them. All seem to be sponsored or co-sponsored by Time's Up!.

For example, on the first Friday of the month and on special occasions, the Central Park Moonlight Ride takes place, with participants meeting at 10 p.m. at the Columbus Circle entrance to the park. This is a low-key, relaxed event that travels less than 10 miles. However, they do occasionally venture "off-trail" onto park paths, so skaters will certainly want to carry some sort of illumination in order to avoid cracks and tree crud. There is a similar Prospect Park Moonlight Ride on the second Saturday of the month, meeting at 9 p.m. at Brooklyn Grand Army Plaza.

During the spring and summer months, Time's Up! also organizes events such as the Earth Day Ride, Cyclone Ride (City Hall to Coney Island), the Historic Ride, and many others. Check the event line-up on their website to find out what is scheduled and when.