Where to Skate: East River Islands

The combination of walkways and road can make the perimeter of Roosevelt Island a fairly pleasant skate, especially during the summer when you can catch a breeze off the East River. The entire route is about four miles and almost entirely flat, so you can do it in a very leisurely hour. However, the path around the island is in variable condition, very good some places, not so hot in others.

There are two routes on/off the island. The tram from Manhattan starts at the corner of 59th St. and Second Ave. and costs subway fare. The tram people are pretty cool about skaters, so you won't have to remove your skates in order to ride the tram.

There is also a bridge from 36th Ave. in Long Island City, Queens, which connects with the second level of a parking garage about 2/3 of the way up Roosevelt Island. To get to the bridge from the island, you have to go up an escalator or elevator inside the garage, assuming they are in working order — the escalator has been been fenced off every time I was in the area in 2015-2016. There is also a helical traffic ramp, but that can be dangerous. The walkway on the bridge is skateable, although it's a bit bumpy at each end.

The Queensboro Bridge from Manhattan to Queens passes over Roosevelt Island but offers no access to the island. 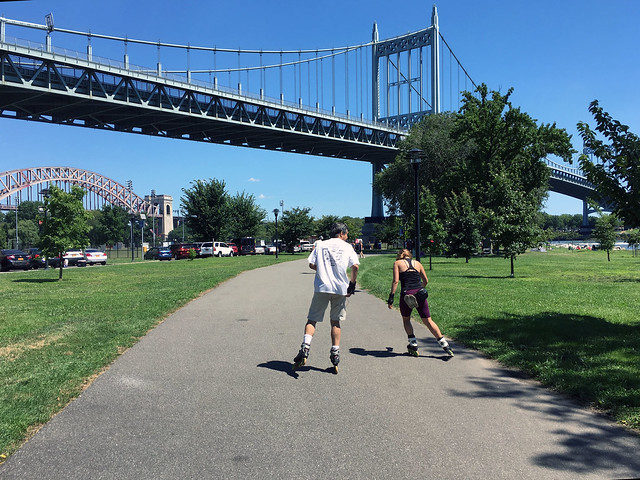 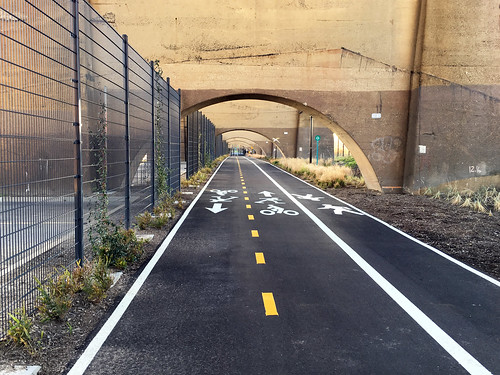 Even seasoned New Yorkers can go blank when you mention Wards Island and/or Randalls Island to the, although parents with soccer-playing kids are likely to know where you mean. The confusion is soon cleared up when you say that it's the island (singular; what were two islands is now one) above which the three arms of the Triborough Bridge come together. But know the name or not, there is some pleasant skating here.

There are several ways to reach the island.` From Manhattan, there is the pedestrian bridge that connects to the East River path at 103rd St.

From the Bronx, the best route to Randals Island is the new and almost flat "Randalls Island Connector" directly below the railroad bridge — the RIC terminates at East 132nd St adjacent to the Post printing plant. You can also use the Triborough pedestrian walkway from the Bronx, but don't bother as it involves two flights of stairs and a ramp with switchbacks.

From Queens, you can use the pedestrian walkway along the Triborough Bridge that begins at Hoyt Ave. N and 27th St. The walkway is very skateable in generally in good condition, but watch out for the three flights of stairs. Another reason to keep your speed under control is that the walkway is narrow for 2/3 of the way and you are likely to meet pedestrians and and perhaps a couple cyclists along the way.

In a sense, Wards/Randalls Island is a big park with a few large facilities plopped just south of the halfway point, including the Manhattan Psychiatric Center, a wastewater plant, and a firemen's training school. Occupying the north half of the island is Randalls Island Park; curving around the south edge is Wards Island Park. The lanes in both are open to cars, but that's because both contain a number of baseball fields, picnic tables, etc. You will encounter some traffic in Randalls Island Park, but Wards Island Park is much quieter.

Besides the traffic issue, Wards Island Park is a more pleasant skate than Randalls Island Park anyway. True, it's much smaller, but the lanes are generally in better condition, there are more trees giving you shade and reducing the wind, and there's perhaps a more scenic view. There's also a bit more variation in the terrain. Nevertheless, neither park will be a challenge to skaters looking for distance. I'd recommend Wards Island Park as more of a place for newbie skaters looking for a quiet, out-of-the-way place to do some learning, or for just having a picnic.