Where to Skate: Skateparks

A listing and other information about city-operated public skateparks, located NYC Parks Dept. properties, can be found at www.nycgovparks.org/facilities/skateparks. That list will be longer than what you read below, as c. 2018-2021, the city has made an effort to add small skateparks to existing parks all around town. We can't keep up!

There are also two skateparks in Hudson River Park, which is operated by a public trust on behalf of the city and state.

Working from south to north...

Iconic spot directly underneath the Brooklyn Bridge that was extremely popular amongst aggressive inline skaters, boarders and BMX bikers. There are some rails here plus a ramp-like area known as the Wall, but also a lot of brick surfaces and broken glass strewn liberally about. Unfortunately, the area has been closed and fenced off since 2010, when DOT started rehabilitation work on the bridge. It was supposed to re-open in 2014, but as of summer 2021 it was still closed. There were reports in spring 2017 of people sneaking in to skate the area, but also of cops chasing them out. As of spring 2021, it's still fenced off. 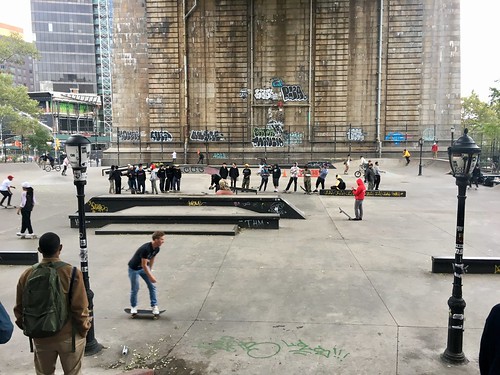 City Parks Dept. facility located directly under the Manhattan Bridge and adjacent to Coleman Playground. The park is reported to have been rebuilt/renovated in 2012. Also known as the Coleman Square Skatepark and as the Chinatown Skatepark.

The park has been very busy when I have skated by on weekend afternoons in 2018-2019, but seemingly every user was on a skateboard.

This is the one of two skateparks opened by the HRP trust since 2010. Also called the Pier 25 Skatepark, it is a skate "plaza" right alongside the river. Closest access is the N. Moore St. intersection on West St. It is also about three or four blocks north of Stuyvesant High School and Chambers St. Plenty of concrete ledges and such, but no ramps or pipes.

The park requires a helmet and recommends other padding, but the facility is unsupervised. Admission is free and the park is open 8 a.m. until sunset, year-round.

The HRP trust operated a couple of temporary skateparks, first in Tribeca around Vestry St., and then further north at 30th St. near the heliport. First permanent skatepark opened (in May 2010) by the HRP trust after experimenting at a couple other locations to the south and north. This park is out on Pier 62 at 22nd St. This is the same pier where Chelsea Piers perviously operated a skating rink and skatepark, but the new facility is publicly owned and there is adjoining rink.

The facility is concrete and has a variety of skate toys, all designed to fit into an ovular shape with "natural" curves. The website described it as "California-style".

The park requires a helmet and recommends other padding, but the facility is unsupervised. Admission is free and the park is open 8 a.m. until sunset.

The first of the new public skateparks to appear in the mid 1990s. It opened about Labor Day 1996 and for a while was one of only two public parks in the city, along with Mullaly in the Bronx. The park was renovated in 2013, but subsequently redesigned and rebuilt. The street course section opened in autumn 2020, but as of August 2021, the separate concrete bowl was far from being completed.

In terms of the "three-tier" description of Riverside Park, the skatepark is on the lowest tier. It is immediately adjacent to the Henry Hudson Pkwy., but between the highway and the rest of the park rather than alongside the river. Enter the park at the stairs on Riverside Dr. at 108th St. and keep heading downward and toward the river. (Alternatively, enter at the 99th St. steps, then skate north and to the left.) The skate park is in the midst of a strip running from 101st St to 112th St. that includes basketball courts, beach volleyball courts and a softball diamond.

Admission was free at last report. Full armor (helmet, kneepads, elbowpads and wristguards) and signed waiver are required. The park is open from mid April to late October, and perhaps into November if weather permits. Hours vary.

Small skatepark that opened in November 2017. The site is tucked away in the northeast corner of Thomas Jefferson Park, in between a couple basketball courts and the FDR, and right outside the south entrance of the MCSM high school. 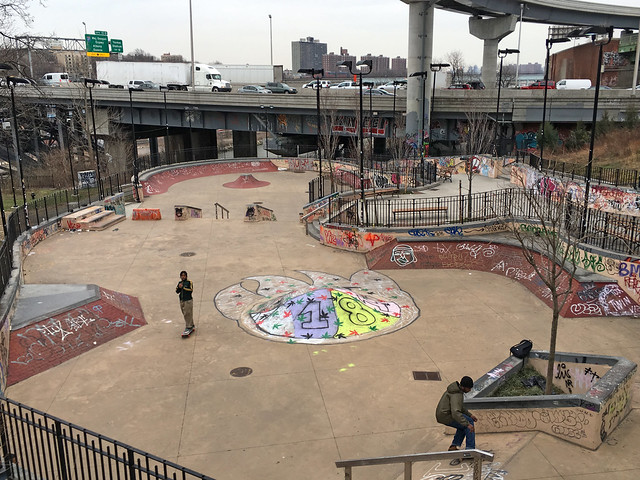 A long time in the making, this skatepark opened late 2013 and is said to be the largest park in the city. It's a bit tricky to find because it's tucked away in an out-of-the-way location under a bridge. Head for the Washington Bridge at Amsterdam and 181st and look for a bikepath on the south side heading down into Highbridge Park. Follow the path and you should find the skatepark underneath the Hamilton Bridge at 179th St. Unfortunately, there is a stairway and the path asphalt is not great, so you'll likely want to walk to the park and put your skates once you get there.

Small neighborhood skatepark, located at the west end of the park by the cricked grounds. No enclosing fence or other barrier, so skateable at any hour.

Small neighborhood skatepark, located in the middle of the park just north of the tennis courts and adjacent to P.S. 615. Opened August 2019.

Skatepark near the Manhattan Bridge that opened November 2016, located at what has been the informal "Fat Kid Spot" park. Obstacles are described as being "street-style".

Plans were announced late September 2017 to replace some or all of this playground with a skatepark. The design was completed by early 2019, but as of summer 2021, procurement was still in process and there was no indication of when construction would begin. 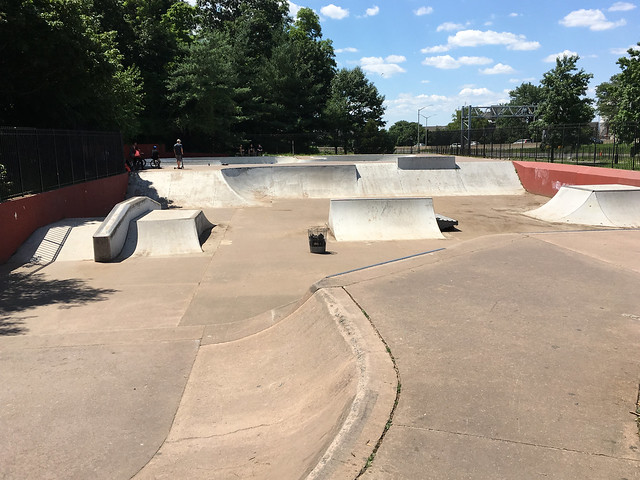 A mostly concrete outdoor skatepark that opened in summer 2001. This is a public park, and admission is free. At one time the schedule seemed to differentiate between skateboard and BMX times. When we've skated past on weekend afternoons in recent years, users were split about half and half between skateboarders and scooter riders.

The skatepark is on the north side of Owl's Head Park. Easiest access is to head to the corner of Colonial Rd. and Wakeman Place, then follow the bikepath into the park about a hundred yards. Alternatively, head for the corner of 68th St. and Shore Road and take the bikepath north past the dog run.

Neighborhood park that underwent reconstruction after being closed for many years to facilitate subway work. When it re-opened in May 2018, it included a small skatepark.

Public skate park that opened in summer 2008 alongside a new soccer field. Area is about 6000 square feet. It is located about a block north of Allerton Ave., and there is a loop off the Bronx Park East bikepath that passes alongside.

This park just across 164th St. from new Yankee Stadium was in the early 1990s the only place in the city that could be called a skate park. On chilly autumn mornings, you could find kids sneaking in and wiping the dew off the decrepit mini-ramp so that they could get a few runs in before the gates were opened and a line formed.

The park has been renovated at least twice since then, including early 1998 and late 2003. Neither renovation has catered to inline skaters, and a visit in late 2016 suggests that the park users are almost entirely BMX type bikers. So aggressive bladers will have their gripes about the orientation of the park features. Nevertheless, the park seems to be in good condition and running smoothly. 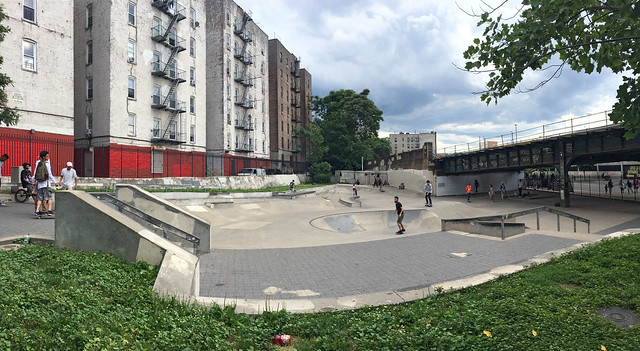 Opened in 2010 and located across the street and south of the old Yankee Stadium site — and four or five blocks south of Mullaly Park. Mostly open air, with just a small part under the elevated subway tracks. The site is all concrete, so there are ledges and such, but no ramps or pipes. 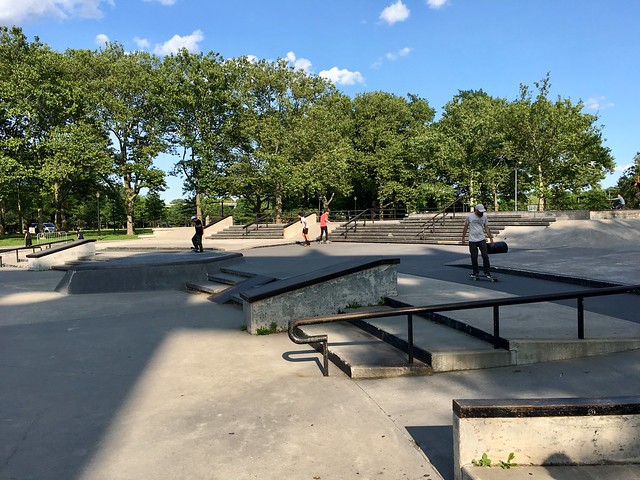 Large public skatepark originally built in 2010 for a skateboarding competition. Located about a quarter mile south of the Unisphere and adjacent to the old New York State Pavilion.

An outdoor public skatepark that opened in September 2004. Local skaters and boarders were able to contribute suggestions during the design process, so we expect it turned out to be pretty skateable. There are ten ramps and several rails. Armor and waiver required. Open mid April to mid October.

Reputedly the only indoor skatepark in the city, located about a mile south of the Staten Island Ferry landing at Richmond, and just around the corner from the Stapleton train station. Privately owned facility of about 8000 square feet that opened in 2012. The owners decided to open the spot after the city messed up Ben Soto Skatepark.

Public skate park that opened in April 2005. However, the city Parks Dept. removed and threw out all the equipment in April 2011 saying it was no longer in acceptable condition. A few rails and ledges were reported to have been left in place, but that's it.

Public skate park that opened in 2015 adjacent to Faber Pool and close to the Bayonne Bridge.

Skateparks on Long Island used to come and go practically with the seasons. Things stabilized for a while with the opening of a several publicly owned parks, but one of the few remaining privately owned parks closed in 2017.

Publicly owned outdoor park that opened 2002. About 11k square feet, open to boards and inlines but no bikes. ID and protective gear required. Website also says proof of residence required, without indicating whether non-residents can use the park at all. Located about 2 miles south of the Baldwin station on the LIRR.

Free public outdoor skate park almost all the way to the east end of Long Island. Located on Moores Lane about a block north of Front St. and about 3/4 of a mile from the Greenport train station.

Publicly owned park that opened May 2004. About 9k square feet.

Entry fee and season pass pricing varies depending on whether you are a local resident.

Outdoor park. Over 14k square feet. Open seven days a week weather permitting, and open after dark. Located about a mile east of the Port Jefferson Station on the Long Island Rail Road.

Formerly located in New Jersey but now moved just barely across the border into Rockland County, close to I-87.