Where to Skate: Brooklyn 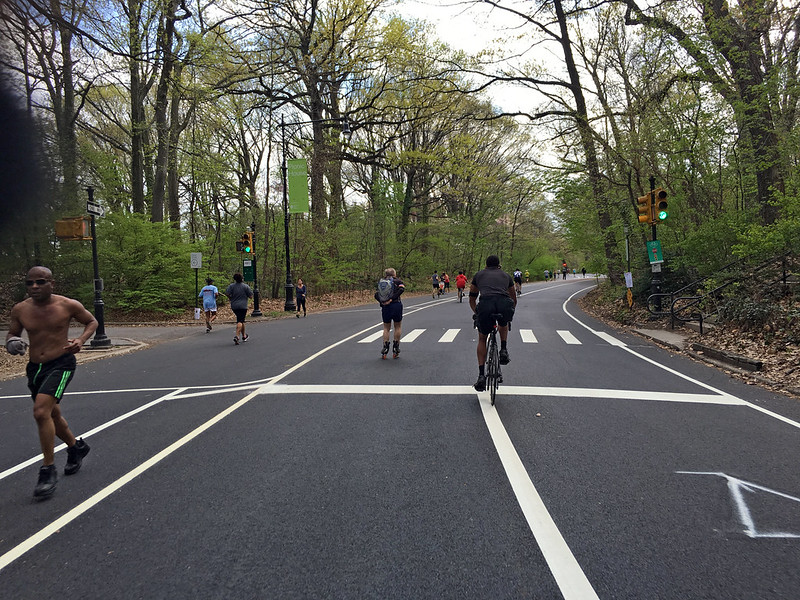 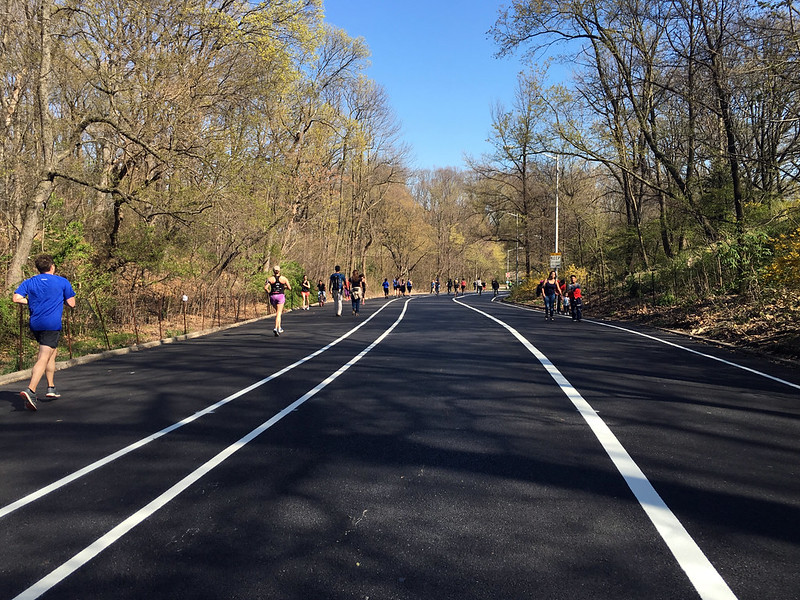 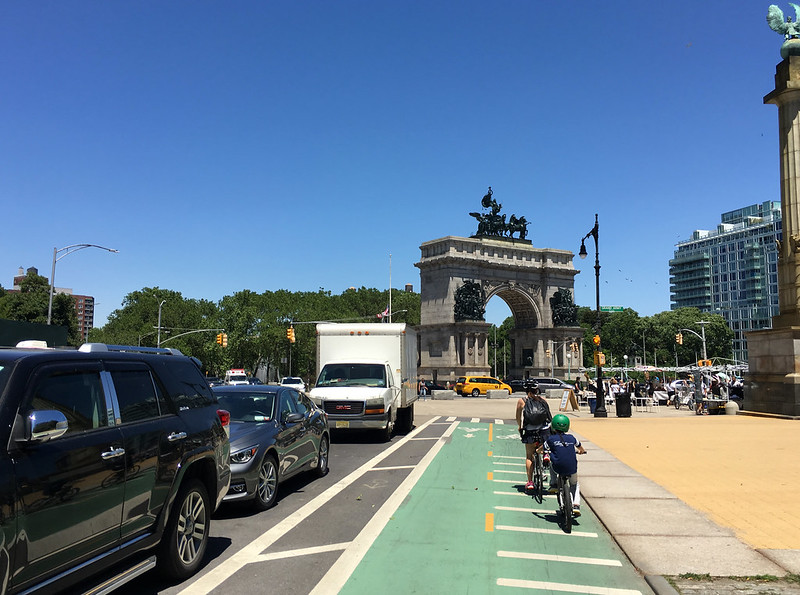 The following article excerpt by Lise Broer is a pretty concise description of Prospect Park. It originally appeared in the April 1995 issue of the New York City edition of MetroSports magazine.

Many New Yorkers are not aware that there are two parks in the city that are good for skating laps. Situated between the Park Slope and Flatbush neighborhoods in Brooklyn, Prospect Park is the borough's largest park. Scenery ranges from rolling meadow to rocky thicket to placid pond with occasional outcroppings of neoclassical architecture. The effect is remarkably like a more famous park across the East River, but without horse drawn carriages and congested roads. Prospect Park is the work of designers Frederick Law Olmstead and Calvert Vaux, built from 1866 to 1872. The same team planned Central Park.

The main roads of this park form a circuit of 3.45 miles. West Drive begins at Grand Army Plaza and runs southwest along the Long Meadow, a half-mile stretch of gentle hillsides and baseball fields. At 3rd Street is an entrance that often serves as a skaters' meeting ground. The Bandshell, visible to the right between 10th and 11th streets, is a popular place to practice. West Drive bends to the left at a bridle path and passes the south end of Long Meadow. Then the road veers rightward and begins a steep descent. Lookout Hill may or may not be the rival of Central Park's notorious Lasker Hill, but it does test the nerves.

Near the top of Lookout Hill is an easily missed transverse called Center Drive. This branches to the left and offers salvation to the novice. Taking this route shortens a lap to 2.6 miles. The Prospect Park Alliance encourages skaters to use Center Drive as a quiet practice ground.

Back to West Drive, Lookout Hill ends at Prospect Lake. As the road rounds the bottom of the park it changes name and becomes East Drive. The skate is nearly flat from Prospect Lake past [Kate] Wollman Rink to the Prospect Park Wildlife Center, better known as the zoo. East Drive becomes a brutally winding climb on Breeze Hill near Battle Pass. This site got its name from the Battle of Long Island. In 1776 Revolutionary War volunteers briefly slowed the British army here on its advance to New York. Shortly after reaching the top of the hill Grand Army Plaza becomes visible again.

Some notes subsequent to the above information:

Effective January 2018, the Prospect Park loop is closed to auto traffic except for authorized vehicles.

As of spring 2016, the quality of the asphalt on the Prospect Park loop is good to excellent. The west side of the loop has just been re-surfaced, so many of the patchy areas are gone. It's been a few years since the east side was resurfaceed, but at the moment it is still in good condition. There is just one bit about a hundred yards long in the southeast where there is a problem with the asphalt going bad.

Also, please note that although the Prospect loop is usually three lanes wide so that conflict between park users for space should not be a problem, you still need to watch out. In particular, the road is a bit tight at the southernmost point, near Machate Circle, and cyclists (and inline speedskaters) are likely to be zooming like crazy here after descending the long downhill.

If you're looking to skate east-west across central Brooklyn, Eastern Parkway is probably the road for you. From the corner of Prospect Park at Washington Ave. on the west to around Ralph Ave. on the east, the parkway is four lanes of smooth asphalt, flanked on both sides by promenades, flanked in turn by two more lanes for neighborhood access and parking. The center four lanes shouldn't be skated since auto traffic seems to be consistently fast and thick, but the promenades are none too shabby. They're each about twenty feet wide and are paved with hexagonal brick that would appear to have been laid down within recent memory; i.e., they're still smooth.

The Shore Parkway bikepath runs along the Brooklyn shoreline from Bay Ridge Ave. at the northwest, south to the Verrazano-Narrows Bridge, then southeast to end by Bensonhurst Park at the Bay Parkway. Total length is a bit over four miles. It is a haunt of skaters, noteably neighborhood families. Being right next to the water, it's almost flat along its entire length and so is mostly a non-challenging, scenic skate.

The Shore Parkway path is perhaps best described as two parts, with the VZN Bridge marking the dividing point.

Speed is possible in the northern half, as the waterside promenade is wide, and there is also a separate bikepath running alongside the highway with a physical division between the two.. The asphalt in the north is in good to excellent condition. The only problem spots occur along the bike lane section where you will have to watch out for developing sinkholes. 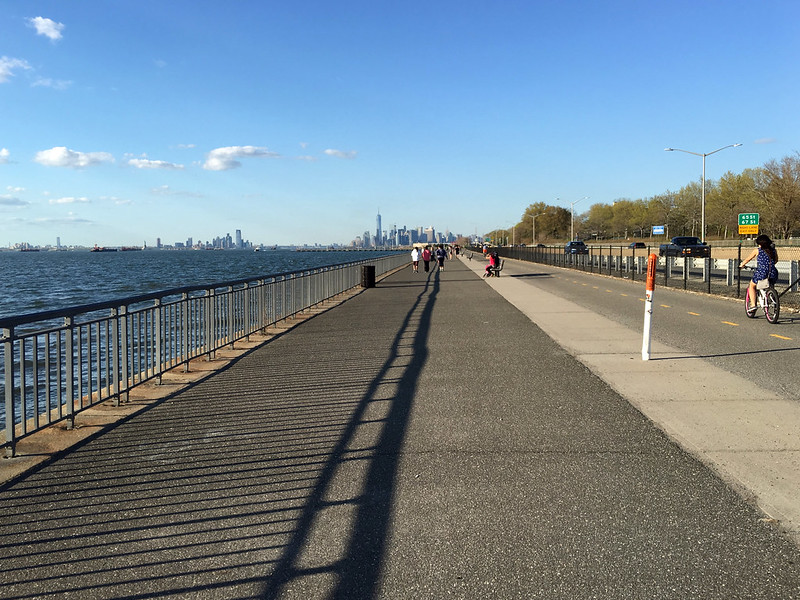 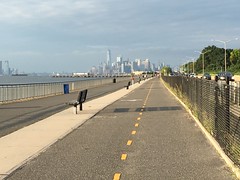 The south half is unortunately not so great a skate. There the path is no more than twelve feet wide, which may sound good, but the density of path users means this is sometimes not enough. Perhaps more importantly to skaters, asphalt on the southern section was as of early 2017 in ighly variable, very skateable in some spots but just barely so in several others.

Besides the traffic density on the southern half of the Shore Parkway bikepath, some problems to contend with are stiff breezes from the bay   it may seem like there's a headwind whichever direction you travel. This may be balanced, however, by the views.

The Verrazano-Narrows Bridge is itself an awesome sight, but you can watch ships transiting the Narrows. In the north there's a decent albeit distant view of lower Manhattan from the American Veterans Pier sticking out at the end of Bay Ridge Ave. With a zoom lens, you can take some nice pics of the Statue of Liberty. The scene around sunset is supposed to be particularly nice.

Just a few hundred yeards from the Bay Ridge Ave. entrance to the bikepath is the Millennium Skatepark in Owl's Head Park.

There is a small loop in the northernmost section of Marine Park, an area bounded by Avenue U, Stuart St., Fillmore Ave., and East 33rd St. The circumference is about one mile, and word is that the eastern side is in somewhat better condition. The area is flat and wide open, which means it's a good learning area for beginning skaters but also that it can get a bit windy at times.

Also accessible from Marine Park is a bike lane alongside Flatbush Ave. which can be followed south all the way across Floyd Bennett Field to Riis Park, in Rockaway, Queens, although there is a bridge on the route and the skateable lane is said to be steep and narrow at this point. The north end is near the Kings Plaza shopping mall, at Flatbush and Avenue U. There is a short spur off to the west along the Shore Pkwy., terminating near where Knapp St. meets the parkway.