Where to Skate: Westchester and Putnam Counties

Before reading about potential areas to skate in Westchester County, you should first take note of the county map of rail trails and bicycle friendly routes: 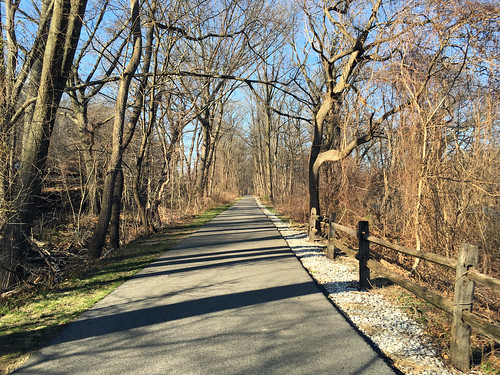 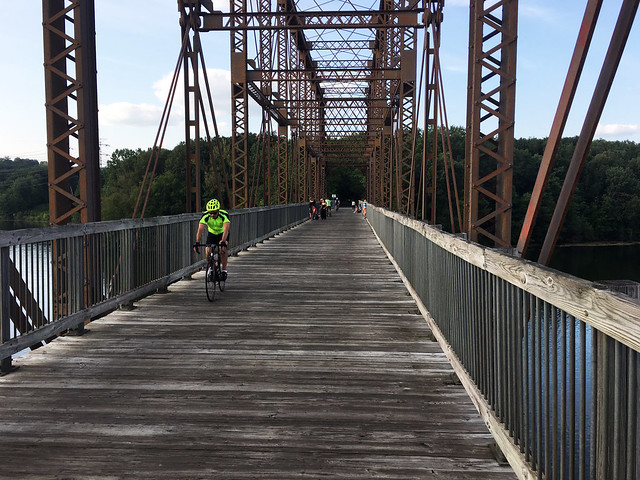 In viewing the SCT map, note that the detour in Elmsford is no longer required. In November 2017, the county finally put in the very last piece of the trail.

The South Country Trailway and part of the North County Trailway closely parallel the Saw Mill River Parkway. There are relatively few road crossings, and in some sections you can skate a couple miles without having to cross a road at all. For example, skating north from the Shepard Place entrance to the South County Trailway in Yonkers, the first intersection is about three miles away at Palmer Road (marked as Bryn Mawr on the SCT map linked above). Note, though, that this means that places to stop along the trailway for water or a snack are not readily accessible. We've done the entire length and found that it really helped to take along liquids and some fruit in a light backpack.

Elevation changes on the two trails are very mild due to the route being a former railway. However, skating from south to north there is a gradual ascent, to a maximum of about 700 ft above sea level at the Westchester-Putnam border.

Asphalt quality along the two trails has been variable, dependent on how long ago it was put down. The asphalt on older sections is showing its age, so in some places you may find the asphalt just a bit chewy and there is bumping and cracking due to tree roots. But some other areas are super smooth. So for example, on the South County Trailway, the asphalt is almost perfect south of Nepera Park (again, see map linked above), but not so nice to the north. Westchester County was working on repairs/repaving to the worst sections in summer 2021. On the North Country Trailway, there was poor asphalt near Yorktown Heights, but this was apparently fixed during summer 2020.

One other issue with the North County Trailway is that there are two segments where the trail is actually the Route 100 highway shoulder. The first, at Briarcliff Manor, is about a half mile long. The second, approaching Millwood, is about a mile and a half. Paving along these sections is okay, but as is always the case along highways, loose gravel can be troublesome.

Prior to October 2020, the only paved route to reach the South County Trailway from New York City involved skating by city streets into Yonkers and then navigating to a trailhead near Tibbetts Brook Park. However, the NYC Parks Dept. at long last completed a project to upgrade and pave the Old Putnam Trail, officially the Putnam Greenway, through Van Cortlandt Park. The "Old Put" starts near the golf course clubhouse and fountain at the south end of the park and heads north through the park to the city line. It connects directly to the South Country Trailway. (Note: There is a proposed segment of the Putnam Greenway that would lead south from Van Cortlandt Park to Kingsbridge Road, but that idea is blocked until the city gains access to the CSX rail right of way.)

Added notes: Where the North County Trailway passes through Eastview, it crosses over State Route 303 and then almost immediately the Saw Mill River Parkway. In between these two bridges, there is a spur off the bikepath that leads down to 303 (i.e., Old Saw Mill River Road). At this point, it is only about a mile and a half from the Kensico Dam. There is a separate bikepath for part of the way to the dam and reservoir.

Also, just north of the bridge over the Saw Mill River Parkway, there is another spur off the trail west into Tarrytown Lakes Park. This side path travels about a mile and a half to the far end of the park to a parking lot at the corner of Neperan Road and Sunnydale Ave. From the parking lot, it is about a mile along Neperan Road and then Main St. to the Tarrytown Metro North train station. 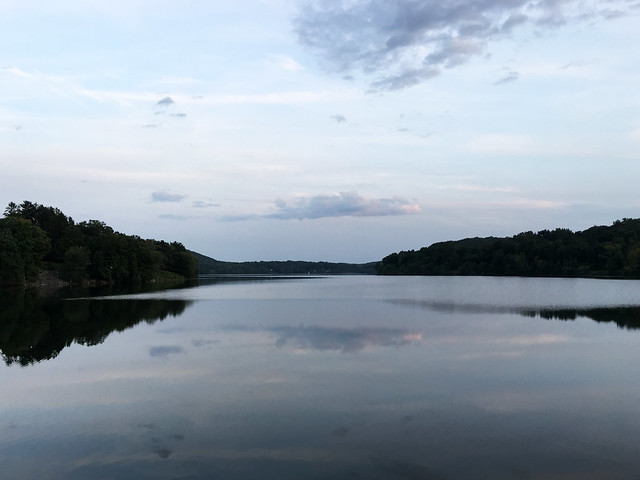 Where Westchester's North County Trailway hits the Putnam County line at Tomahawk St. in Baldwin Place, the trail segues smoothly into the Putnam Trailway, which continues on for another 12 miles to the edge of Brewster, where there is a Metro-North train station. (Thus, the triple combo of the South County, North County and Putnam trailways is about 48 miles.)

The Putnam Trailway is relatively new, and as of August 2018, the bulk of it is super smooth. Also on the plus side, if you're skating south to north, is that there about a 300-foot descent in elevation from Baldwin Place to Brewster, including a big swoop downward after exiting Mahopac. So this can be an exhilirating skate even if you're dog tired from already skating the Westchester trails.

Negatives regarding the Putnam trail include that its southern third does seem to have a lot more street crossings than do the Westchester rail-trails, including one dangerous spot in Mahopac where the trail is steep and sightlines limited. Also, the trailway ends on the outskirts of Brewster and there are a hill and some streets to navigate in order to reach the train station.

Putnam County has been working on a rail-trail that would link Brewster to the Connecticut state line at Danbury. As of summer 2018, there was about two miles of this Maybrook Trailway complete, in two chunks alongside Brewster. It's not clear when the two pieces might be linked or the rest of the route to Danbury completed.

In August 2017, plans were announced to create a new "Beacon Trailway" linking Brewster to Hopewell Junction as part of the Empire State Trail system. Subsequently, this trail was renamed the Maybrook Trailway to conform with historic usage and because the trail would not actually lead to Beacon, N.Y. This new trailway officially opened January 2021 along with the rest of the Empire State Trail.

The new Maybrook Trailway uses a bit of the north end of the existing Maybrook Trailway, but documents do not otherwise show the two plans as connected. It also connects to the Putnam Trailway. It connects on the south end in Brewster to the Putnam Trailway, and at the north end in Hopewell Junction, it connects to the Steinhaus Dutchess Rail Trail leading to Poughkeepsie and the Walkway over the Hudson.

The following description of the Kensico Dam Plaza and the Bronx River Parkway is by Lise Broer and originally appeared in the October 1995 issue of the New York City edition of MetroSports magazine.

If Central Park is the social center of the skating scene in New York City, then the Kensico Dam at Valhalla is Westchester County's Central Park. It was first built as an earthen dam between 1880 and 1885. Stone quarried from nearby Cranberry Lake Park replaced the earth in 1915 and created a paved plaza. Named after the great hall in Norse mythology where the souls of heroes are honored, the plaza has several turn-of-the-century attempts to invoke Teutonic imagery. The Kensico Dam holds 30,573,000,000 gallons of water in a reservoir covering 13.3 square miles. It supplies water to New York City and to several Westchester communities. Local skaters recognize its real value as a skating center.

The plaza is mostly flat and well-paved. The t-shaped circuit varies the scenery and keeps the skate interesting. This is a good place to learn how to skate. Although there is no official direction of travel, most skaters follow a counterclockwise path.

Some of the local skaters maintain a slalom course at the western edge of the loop by the dam. While this course has only 20 cones and a slight grade, cones are spaced at standard 6 foot competition width. Slalom skaters accelerate along the dam and make a right turn to enter the course for high speed "ballistic" runs. As with other slalom sites, keeping the course clear is a constant concern. Here the main danger is from novice skaters who stray close to the cones as they do a loop.

Near the center of the plaza away from the loop is an area favored for rollerhockey. The rough quality of the concrete here creates a great grip, but is notorious as an eater of wheels. Wear pads to play here. It isn't any easier on the skin.

Fitness skaters may be bored by the small size of the plaza. One way to add a few more kilometers to a workout is to go south along the Bronx River Pathway. The Pathway is an 807 acre linear park extending 13.2 miles from the Kensico Dam south to New York City. It runs parallel to the Bronx River Parkway and the Metro-North Harlem Line. To reach it from the Dam, exit at the southeast edge of the plaza and go east. The Pathway picks up across Broadway.

The pathway portion from the Kensico Dam Plaza south to the Westchester County Center in White Plains is fair for skating. This comprises slightly more than half of a 5-mile trail. Several other portions of the Bronx River Pathway are open to bicycles. Westchester In-line Skating Association president Eric Paulson shares a warning. "I would discourage anyone from skating most of it. The pavement is just too patchy." On Sundays during May, June, September, and October skaters have an extra treat. The Bronx River Parkway itself is closed to traffic from the Westchester County Center in White Plains to Fisher Lane in North White Plains. While the program is named Bicycle Sundays, the Westchester Parks Department invites skaters to take advantage too.

Although the above was written long ago, the Bronx River Parkway summer Sunday closings have continued in subsequent years. Note, though, that the closing only lasts a few hours, finishing up in early afternoon. It's a scenic skate/ride, hilly but quite manageable. Members of the Empire Skate Club will head up for a group skate along the parkway two or three times every summer.

Also note that although there has been an effort to create a good bike trail paralleling the Bronx River Parkway, from the NYC border at Mt. Vernon in the south to the Kensico Dam plaza in the north, it is not complete. A couple significant gaps remain, but it is possible to get around them on local streets. If you want to explore, see the county's map: